The Baška International Guitar Festival is one of the largest and most significant events of the packed Summer in Baška programme, which every year attracts a large number of foreign and domestic visitors. After a two-year break caused by the coronavirus pandemic, the BIG festival, in its ninth edition, returns at the traditional time in August with an attractive and varied programme that will satisfy even the most demanding music enthusiasts. Admission is free!

What makes the BIG Festival so special is not just its exciting programme including performances by international guitar stars, but also its settings. For the first two days, the festival takes place in the churchyard of St Lucy’s in Jurandvor, which has special importance in Croatian history as the site where the Baška Tablet was discovered. Its unique ambience becomes even more special under a starry sky, accompanied by the sound of guitars played by some of the world’s most fascinating artists. The grand finale of the festival will take place right by the sea on Stara Riva waterfront in Baška, against the perfect backdrop of the lights of this enchanting small town steeped in tradition.

The BIG Festival traditionally starts on 17 August with the attractive Italian Lovesick Duo as headliners. Francesca on the double bass and Paolo Roberto on the guitar made great strides on the music scene during the pandemic, when we were all wondering what the world of musical performances would look like in the future. Going against the prevailing atmosphere of gloom, the Lovesick Duo released a series of home videos that went viral on the internet, turning them into a genuine musical attraction! Next up will be the best Slovenian fingerstyle guitarist, Sašo Zver, who graduated from the prestigious Berklee College of Music and has performed with some of the greatest contemporary guitarists, including Tommy Emmanuel, Woody Mann, Keb' Mo, Jack Pearson, Vince Gill, Tom Bresh, Laurence Juber, Stanley Jordan and Eric Bibb.

New in this year’s BIG festival are attractive film screenings in Jurandvor at the beginning of each evening. In cooperation with the History Film Festival – the only international festival of historical documentaries in the world – music documentaries have been selected that will introduce the audience to the musical programme that follows. The first night of the festival will start with the screening of This is Love, the story of the soul singer Rudy Love, directed by John Alexander.

The second evening of the festival, 18 August, will begin with a screening of the film Rumble (winner of a prestigious Sundance Film Festival award), which describes the influence of Native Americans on blues, rock, heavy metal, pop and rock music.

The concert programme will continue with a performance by the Petra Börnerová Trio, a musical family from the Czech Republic and Slovakia, whose repertoire is grounded in blues, folk and other genres of American music. They are the most significant representatives of their countries in this domain, as evidenced by the prestigious awards they have won, and they regularly perform throughout Europe. The last performance on the Jurandvor stage under the stars will be by the Italian guitarist and composer Filippo Cosentino, who is considered one of the greatest up-and-coming talents of the European jazz scene. He graduated from the Faculty of Philosophy and the Conservatorio di musica G. B. Martini in Bologna, and he has performed at some of the world’s most prestigious jazz festivals, from Europe and the USA all the way to Hong Kong and China.

The third and final festival evening is reserved for excellent Croatian performers. Edi Maružin, the leader of the popular band Gustafi, has embarked on an unusual project called Edi East Trance Blues, generating an excellent reception from critics and audiences alike. Edi creates original, interesting and innovative music based on blues expression, which captures the listener’s attention with various details ranging from the indispensable Istrian canto through trance and neo-blues all the way to the Siberian steppe song. The next artist to perform at Stara Riva in Baška on the third festival evening is Branko Bogunović Pif, one of the most influential Croatian guitarists. As a studio musician, he holds the absolute record in Croatia as he has recorded over 400 albums for various artists and collaborated with the most eminent Croatian musicians.

Three of the aforementioned artists will not only perform on stage but will also run music workshops in the mornings in the relaxed environment of St Lucy’s. Interested participants can join Sašo Zver’s fingerstyle guitar workshop, Filippo Cosentino’s baritone workshop, and Branko Bogunović Pif’s acoustic fingerstyle and electric guitar workshop, at no charge. In addition to the workshops, we must not forget the guitar exhibition of classical guitar builder Stanko Kamenar and electric guitar maker Robert Hent on 17 and 18 August at St Lucy’s in Jurandvor.

This enviable list of performers, lecturers and events is the result of long-term cooperation between Baška Tourist Board and the Hal Association, which carefully considers and selects the programme of the festival in order to provide visitors with an unforgettable experience and an exciting, high-quality festival programme that will make them return to the BIG Festival every year! 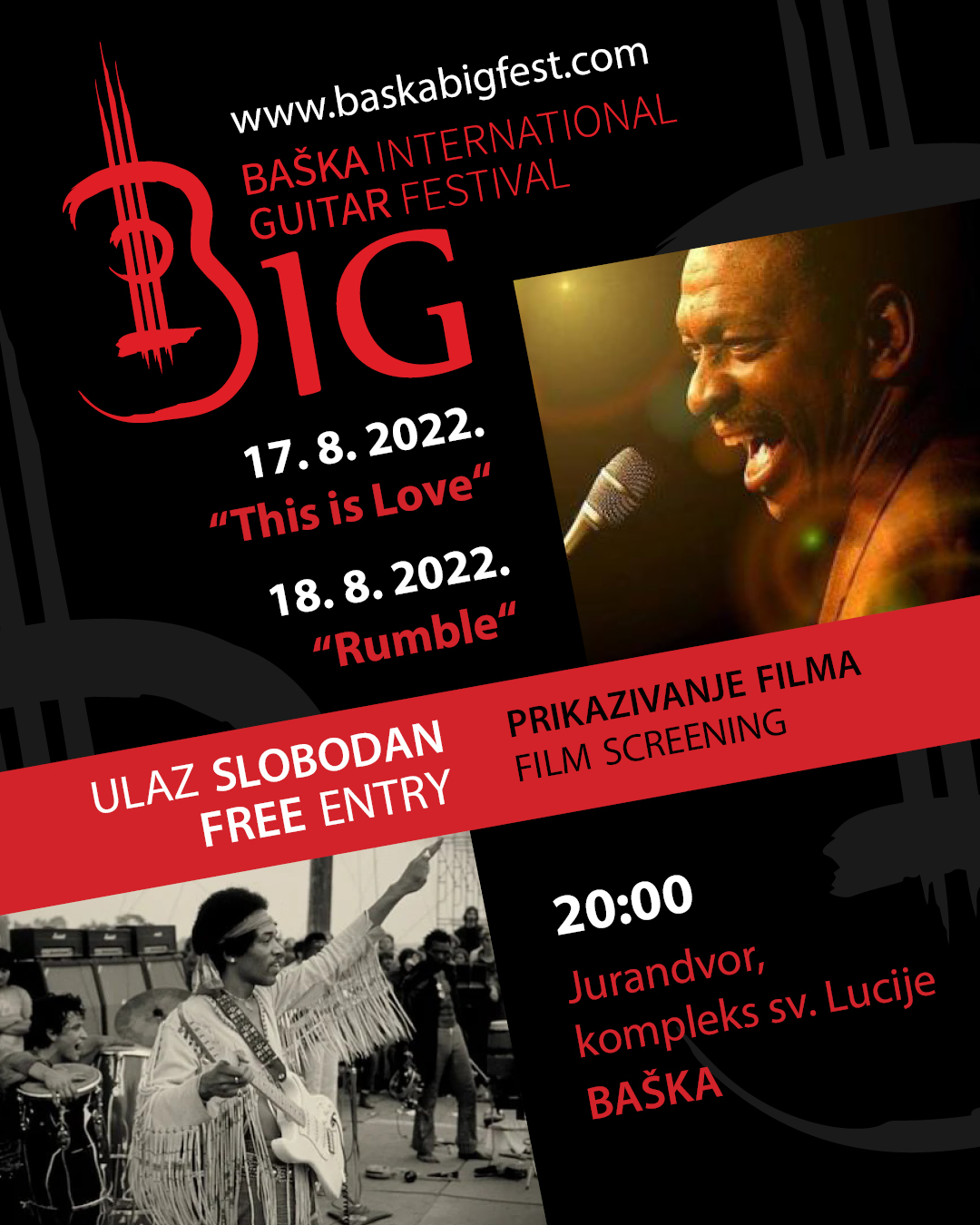