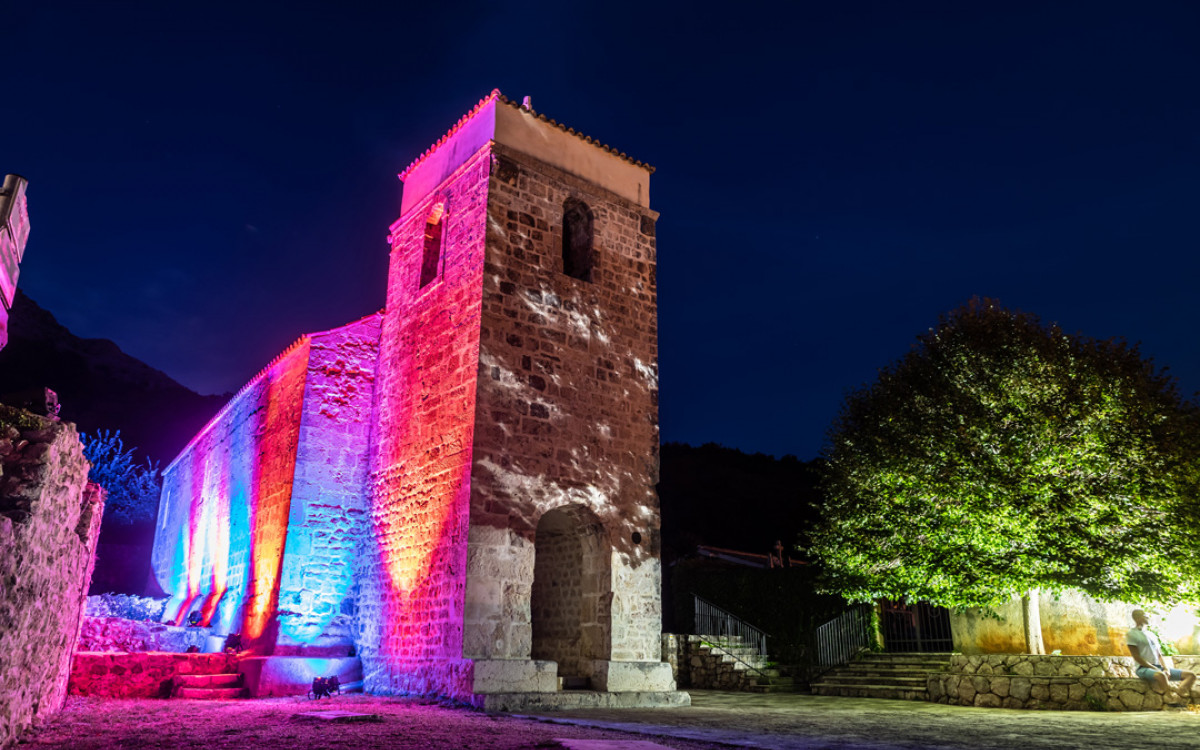 The Church of St. Lucy

St. Lucy's Church is one of the most famous churches on the island of Krk, but is also important in Croatian history as the place where the Baška Tablet was found; its replica is still kept in the church today.

According to the text of the Baška Tablet, it may be surmised that the Church of St. Lucy was built at the turn of the 12th century on the remains of a former early-Christian basilica; it reached its present configuration only in the 14th century.  One of the most striking elements in its interior is the main altar, a wooden polyptych made in the 14th century by masters Luke and John, sons of Paolo Veneziano, the original of which is kept in the Bishop's Palace in Krk.

The church came into regular use only in the 19th century, when it was handed over to the Diocese of the Bishop of Krk and his successors.

The area surrounding the church was mainly employed for agricultural purposes, and various buildings were erected there in the course of its history; in the year 2000 all of their remains came to be included in the Archaeological Park.

Baška's Glagolitic Trail develops through the local cobble-stoned streets and the area's extensive natural beauty. It is the best way to discover the history that shaped the town and all the Glagolitic letters that constitute both a local trademark and an invaluable cultural seal of Baška’s history. 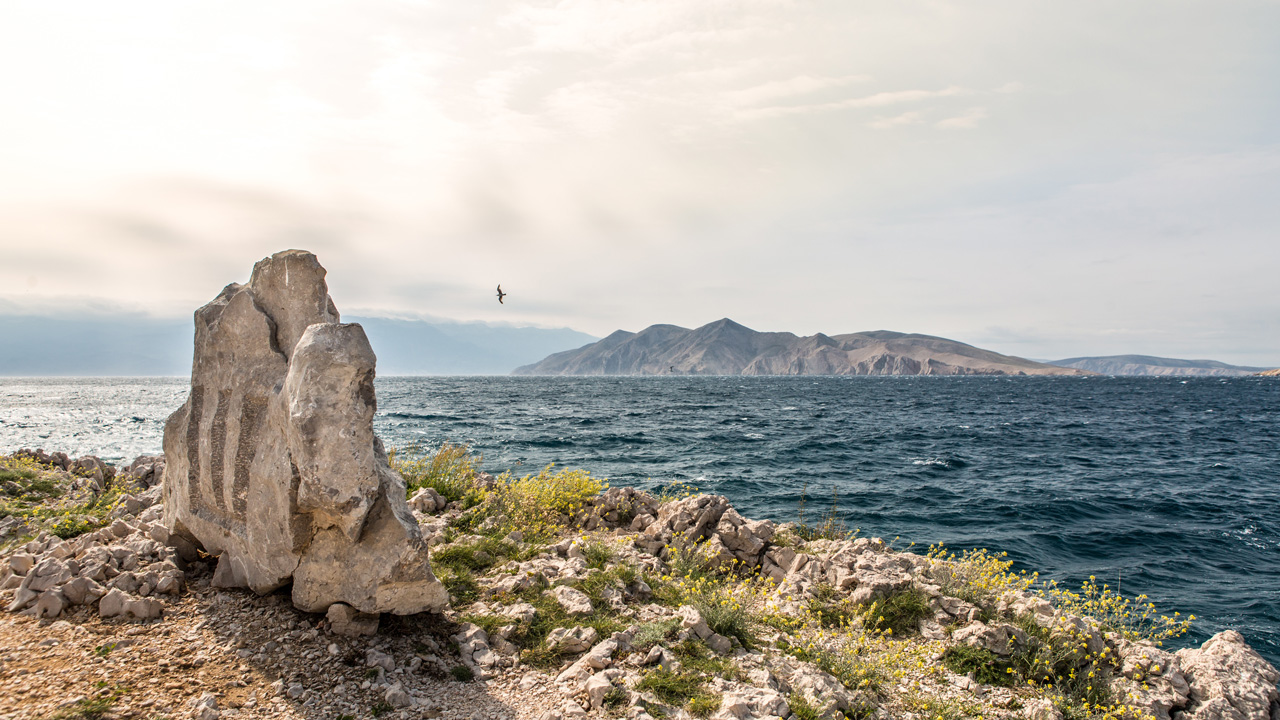 In order to make the visitors' adventure interactive and more educational, the Sinjali Society and the Baška Municipality's Tourist Board have jointly created a guidebook of Baška's Glagolitic Trail. It provides a more thorough understanding of the items on display by listing the 32 stone sculptures with engraved Glagolitic letters, as well as the complete Glagolitic alphabet and the meaning of its letters. It also contains information on the Baška valley where the sculptures are located, and supplies a town map indicating the sculptures' location.

Learn the Glagolitic alphabet in a fun way: copy all the letters along the Glagolitic path by placing the designated pages of the brochure on the small plaques that you will find at each monument and making a rubbing of the respective letter. Once you have done this with all the letters, you will receive your certificate from the ‘Sinjali’ association!

The Church of Our Lady of Gorica

The Church of Our Lady of Gorica is one Croatia’s oldest shrines and the largest in the Krk Diocese. It was built in 1415 and is renowned for its bell, which dates back to 1594 and is traditionally rung when the bishop of Krk Island visits the Baška valley.

The Church of Our Lady of Gorica was named after the Goričica hill in Jurandvor, where the church was initially built.

The interior of the church is decorated with altar paintings by Celestin Medović, one of the most notable Croatian artists of the first half of the 19th century.

The church may be accessed either via a road or by climbing the 237 steps that leads to it; the construction of the staircase began in 1887 and was completed in 1891. 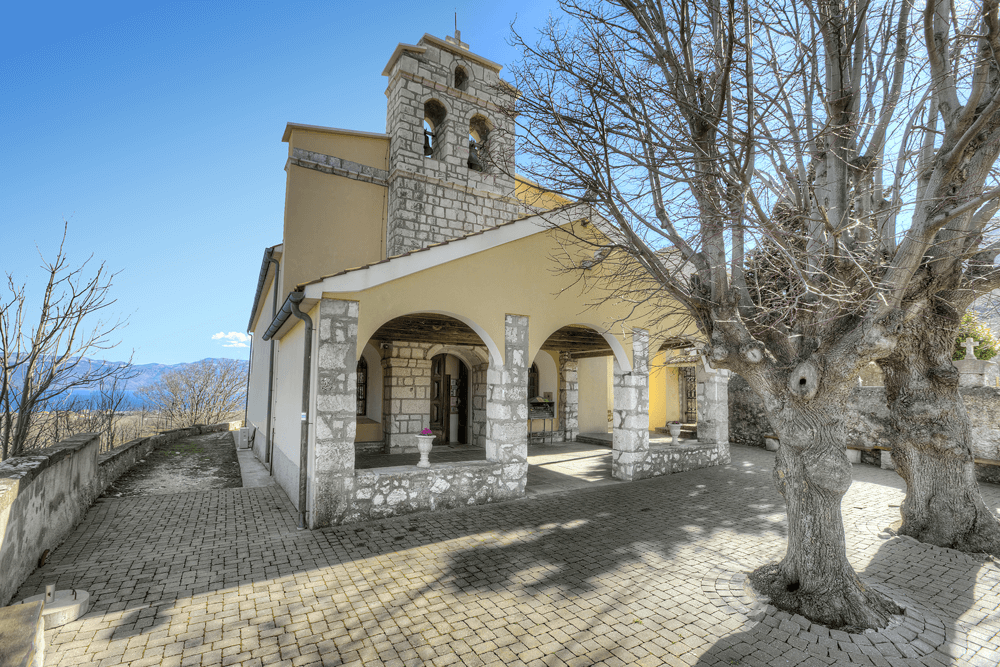 The Church of St. John the Baptist

The “Trail to the Moon and Back” leads to the Church of St. John the Baptist and its cemetery, which is the resting place of Czech Emil Geistlich, considered to be one of the founding fathers of Baška's tourism industry.

The Church of St. John was Baška Castle's parish church and place of worship; it was built in 1232, and was destroyed by the Venetians in 1380. The side room next to the church has been converted into the ‘Sveti Ivan’ (St John) gallery and features the ‘Starac’ (Old Man) bell from 1431.

The Church of St. John is one of the most popular locations in Baška, and is renowned for the astonishing view over the whole Baška Valley and of Prvić Island which it provides.

St. John the Baptist is the patron saint of both the parish and the Baška Municipality. 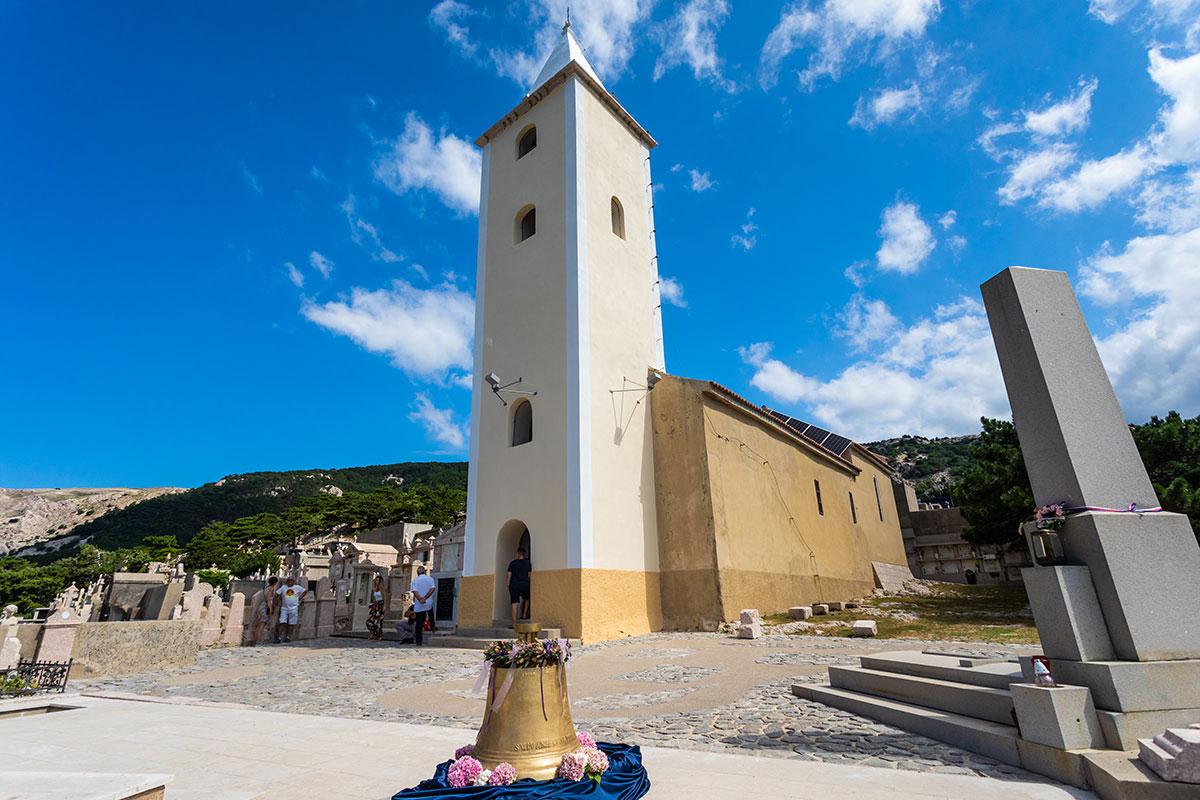 The Parish Church of the Holy Trinity

After the people of Baška had moved from the Castle on the hill down to the area closer to the sea, the need for a new parish church began to be felt. The Church of the Holy Trinity was built in 1723 and is the largest church in Baška. It is a baroque three-nave building whose interior hides eight altars; the main one is dedicated to the Holy Trinity and is the work of a local 18th-century master, Fran Jurić.

The church also contains artworks by other famous Italian painters, such as the Venetians Paulo Campus and Andrea Mantegna from the 16th century, and Jacopo Palma Jr. from the 17th century. An artistic silver cross that was donated to the church in the 15th century as a gift from the Frankopan counts of Krk is also held there. 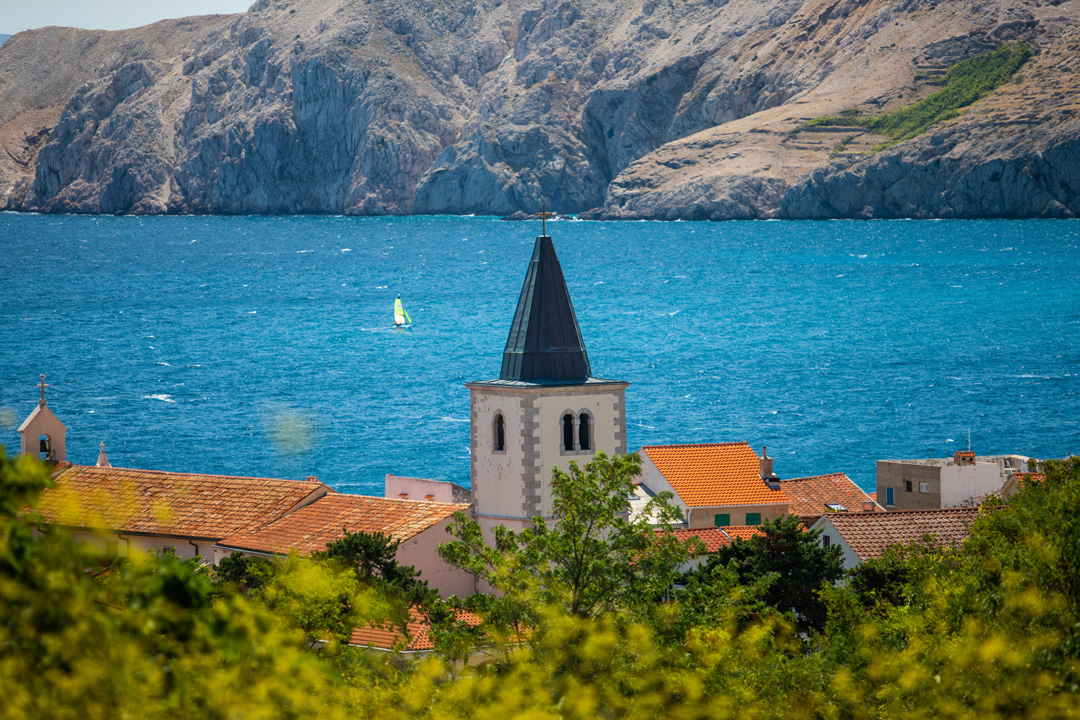 The Chapel of St. Mark

The Chapel of St. Mark was built in a Romanesque style in 1514 and is located near Vela Plaža.
The area under the chapel is an archaeological site in which the remains of an antique mosaic, of a basilica from the 5th century BC and an early Christian baptismal font were found.
The size and position of the basilica and of other archaeological remains suggest that the surrounding area was inhabited at the time of its construction.
The Chapel of St. Mark is today employed as an exhibition space and as a museum of sacral art. 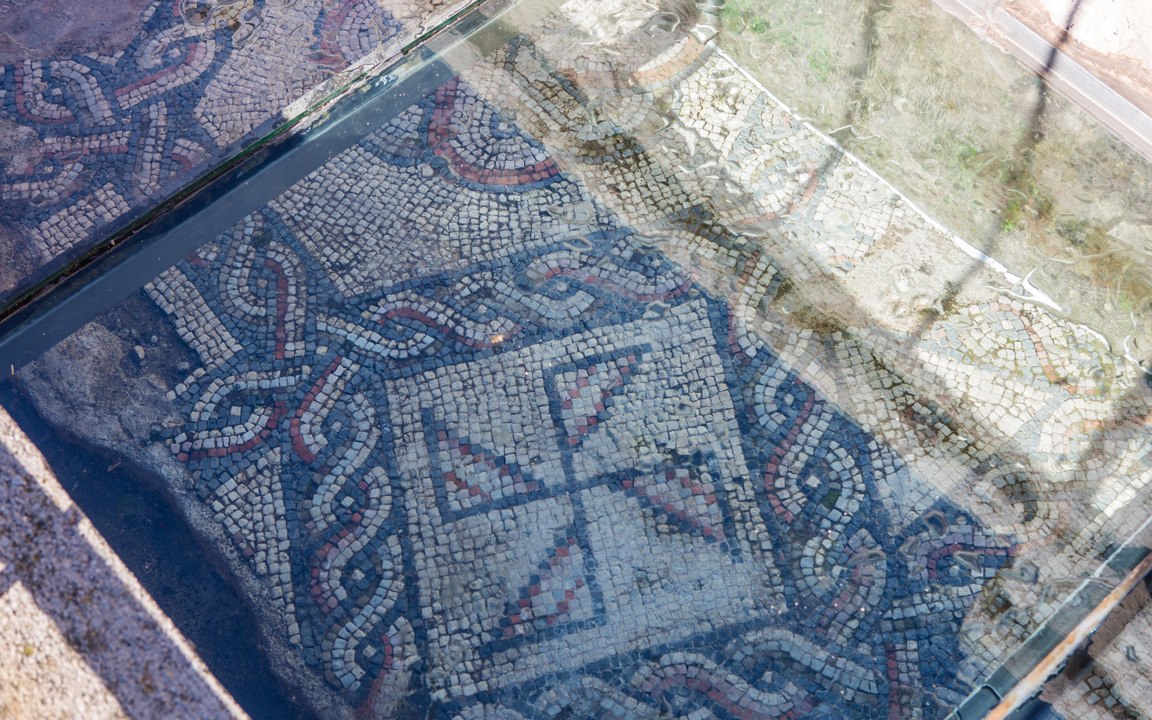 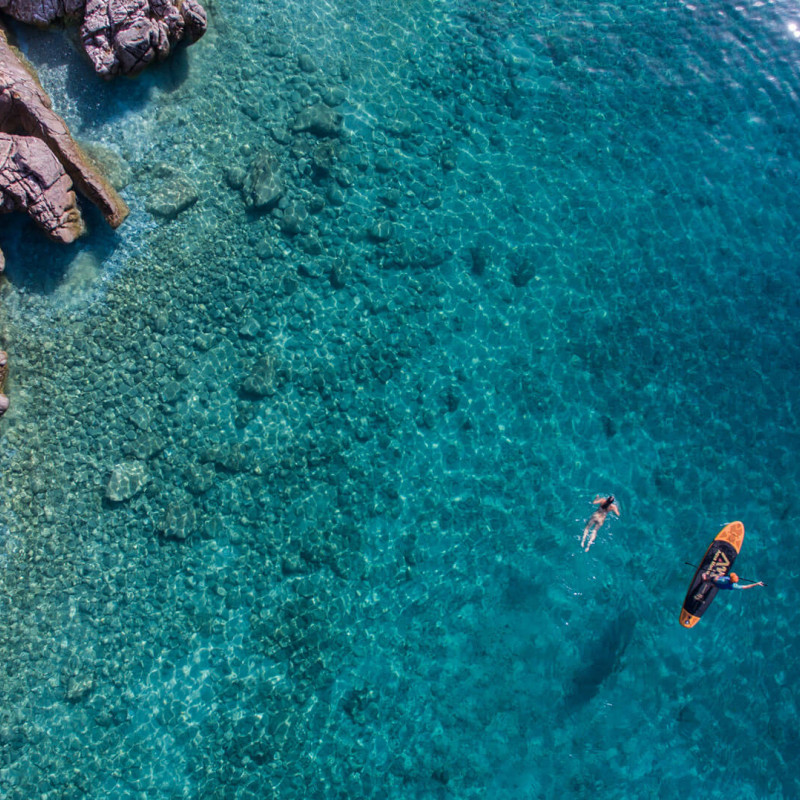 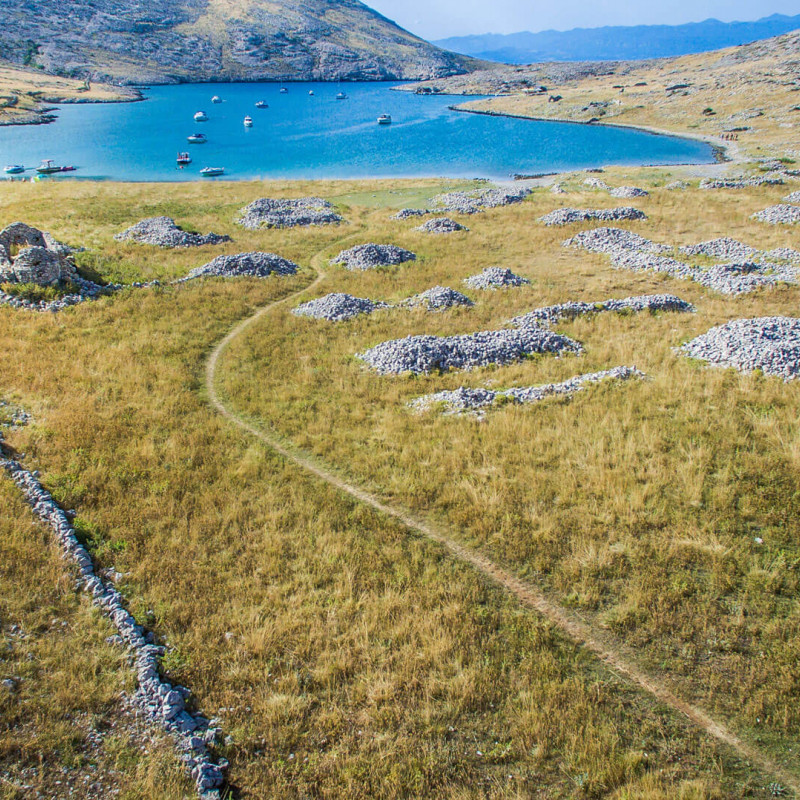