This year’s Summer in Baška programme offers a variety of events for all ages and interests, guaranteeing great fun for both local people and visitors!

In addition to already well-known and traditional summer events such as Fisherman’s Day and the Baška International Guitar Festival, for this summer the Baška Tourist Board has prepared a programme divided into eight categories: Summer Nights at the Waterfront, Musical Nights Under the Stars, Klapa Song Evenings, Stay for Summer, Famous Actors in Baška, Zvonimir Gallery Exhibitions, Active Summer in Baška, and a series of guided walking tours: Discover Baška! Experience Baška!

We started the summer programme last Saturday with the first of the two performances in the Famous Actors in Baška programme. In cooperation with Valamar, we had an excellent time at the Baška Beach Camping Resort watching the one-woman show ‘DISCO BABA’, written in Arijana Čulina’s distinctive style. We will continue the theatre programme in September with the ‘Vla, Vla, Vlajland’ cabaret performed by actress Ecija Ojdanić.

An indispensable part of Baška’s tourist offer is the promenade performances by klapa vocal groups. On Sundays, passers-by will have the chance to enjoy Klapa Song Evenings in the smaller streets and squares in the old part of Baška. Klapa singing is included in UNESCO’s Representative List of the Intangible Heritage of Humanity, so it is not surprising that it is always well received by both local people and guests.

Thursdays are reserved for Summer Nights on the Waterfront, concerts that are always interesting to locals and guests alike looking for great summer entertainment. In addition to the talented up-and-coming Croatian musician Zsa Zsa, the summer stage will host performances by numerous bands from Rijeka. Dellboys, The Janitors, Lorean Dey and the increasingly popular PachaMama Street Connection await us on Stara Riva.

A somewhat more serious programme entitled Musical Nights Under the Stars will take place at really special locations. In the beautiful churchyard of St Lucy’s in Jurandvor, visitors will be able to enjoy the unique voice of Istrian singer-songwriter Elis Lovrić and the concert ‘Three Stories’ by Jelena Radan and the group Meritas. In front of the Parish Church of the Holy Trinity (Sv. Trojica) in Baška, in addition to the traditional klapa concert, this time with the local Klapa Zvonimir and the women’s klapa Vejanka, audiences will appreciate the musical ‘Jalta, Jalta!’ performed by the Surian family, and the performance of the young singer of spiritual songs Vanessa Mioč on theFeast of the Assumption.

Traditionally, the first weekend in August (5-7), is reserved for three days filled with tradition, entertainment, culture, gastronomy and sports. The central event – Fisherman’s Day, which has been taking place since 1910 – will this year include performances by renowned Croatian musicians: Neno Belan & Fiumens, Daleka Obala, Mjesni Odbor, Klapa Kampanel and Trio Marinero will entertain those gathered.

The Baška International Guitar Festival is eagerly awaited as ever, and will bring many well-known local and international guitar and music stars to Baška from 17 to 19 August: Lovesick Duo, Sašo Zver, Filippo Consentino, Petra Börnerová Trio, Edi East Trance Blues and Branko Bogunović Pif. The festival programme will also include an exhibition of classical guitars by Stanko Kamenar and electric guitars by Robert Hent. A new feature – presented in cooperation with Istra Film – is outdoor screenings of documentary music films.

Summer is here, school is over, and kids have all the free time in the world: the only question is what to do with it. For them, we have prepared outdoor evening cinema screenings and numerous creative workshops as part of the Stay for Summer programme. Children can get busy creating hands-on colourful and beautiful souvenirs of the summer.

On 15 July, Domagoj Jakopović Ribafish will swim to Baška and delight and educate visitors as part of the RokOtok event. For those interested in learning something new, the AZ Jurandvor agency organises a five-day Glagolitic School in Jurandvor with a course in writing Glagolitic script.

Those with an adventurous spirit, who stick with sports even in the hot summer months, can take part in the Active Summer in Baška programme, which includes the exciting outdoor activities Good Morning Vrženica (hiking & abseiling), Discovery Climbing and Moonshine-Sunset Summer Bike Tour. On a more relaxing note, on Tuesdays and Thursdays there are morning yoga sessions as part of the Time for Yogaprogramme.

Those of a calmer disposition, who want to get to know Baška through interesting guided walking tours, are invited to join the Discover Baška! Experience Baška!programme on Fridays. The two themed walks, which will alternate, are entitled Pebble, corner, well and bee. Get to know Baška through play and 1,000 years of love of the people of Baška for the Glagolitic script.

Finally, we must not forget to mention the guest exhibitions at the Zvonimir Gallery. From 8 July until 3 August, a selection of paintings from the collection of the painter, sculptor, musician and actor Ivan Kumbatović Žantonić entitled ‘Bodulija – Another Planet’ will present his work to the Baška audience for the first time. The Fisherman’s Day traditionally includes the opening of an exhibition dedicated to the sea: this year, from 5 August until 13 September, it will be the photo exhibition ‘Time of the Sea’ by Ivan Kosić, fisherman and photographer.

In addition to the above, there are also numerous other events: the Concert under the Starry Sky organised by the Sinjali Society (23 July), PiciginFest organised by SD Vihor (30 July), Amphibious Event organised by Aperol Island (30 July), ‘Rokova’ – Feast of St Rochus in Draga Bašćanska organised by BK Jabuka (16 August), and the concert at Batomalj Square, organised in cooperation with the Batomalj Local Council, dedicated to the most beautiful songs of the one and only Oliver, performed by the young and talented Antonio Kristofić (27 August).

The Summer inBaška programme guarantees a wealth of choices in which everyone will find something to their taste!

SUMMER IN BAŠKA – THE PROGRAMME

Musical Nights Under the Stars

Summer Nights at the Waterfront

21 June – 15 September /Tuesdays and Thursdays/
Time for Yoga I 08:00
@ Park next to the Valamar Zvonimir Hotel

ADMISSION TO ALL PROGRAMMES IS FREE! 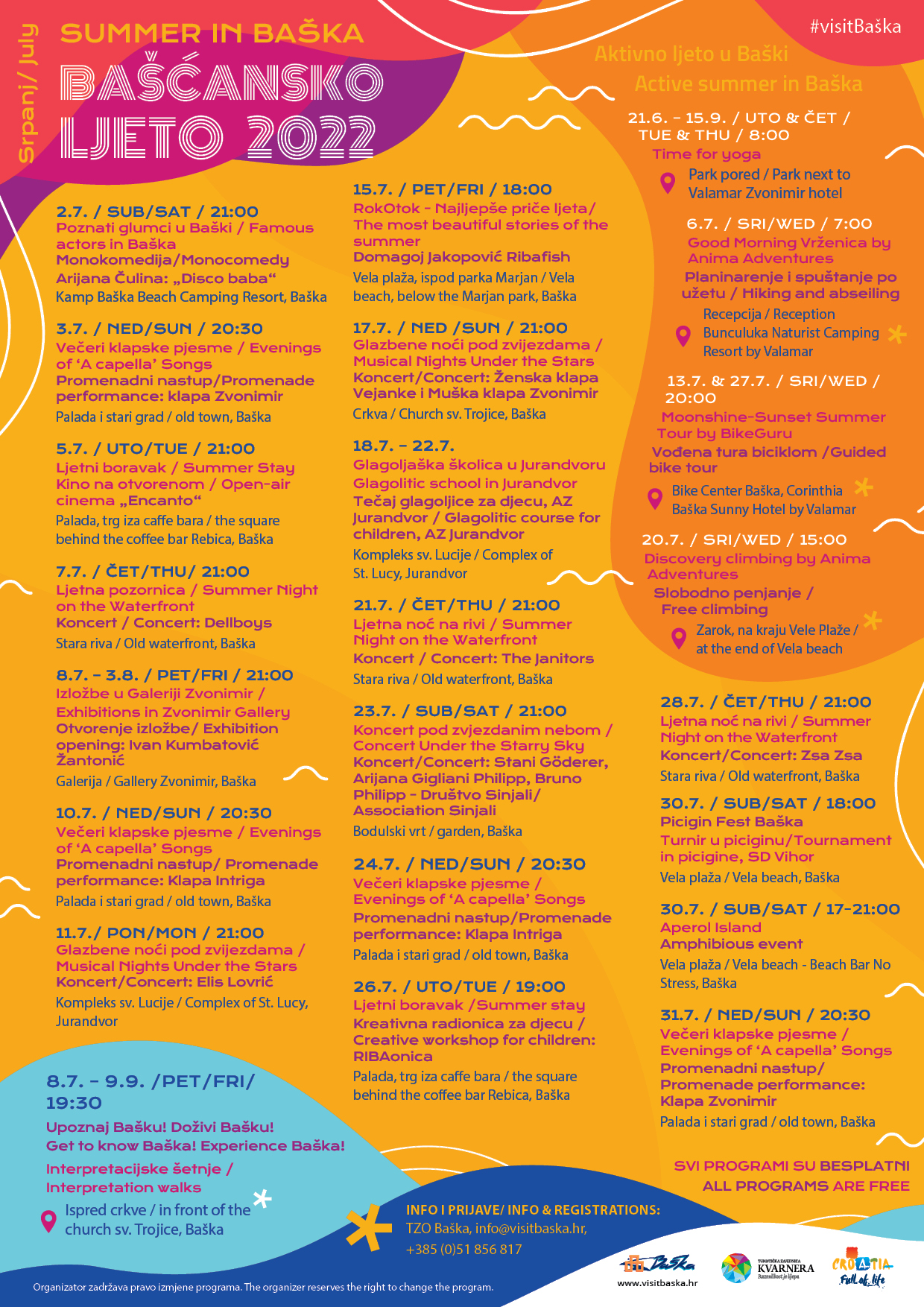